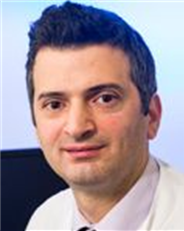 Dr. Martin Pule is Clinical Senior Lecturer in the Dept. of Haematology at UCL Cancer Institute and Honorary Consultant in Haematology at University College London Hospital. His research is focused on many aspects of genetic engineering of T-cells for cancer treatment, with a particular focus on CARs.

He entered the T-cell engineering field in 2001 as a travelling Fulbright Scholar at the Center for Cell and Gene Therapy at Baylor College of Medicine, Houston. Here, Martin Pule was the first to describe third generation forms of CARs and described one of the first clinical studies of CARs, which showed efficacy in a solid cancer. Martin Pule is Director of the UCL Chimeric Antigen Receptor (CAR) programme.

He holds a Bachelor of Medicine and Bachelor of Surgery from University College Dublin and is a Fellow of the Royal College of Pathologists.